What Does A Girl Want?

To celebrate my upcoming Feb release-What A Girl Wants and Valentine's Day, I've decided to hold a contest to see what exactly does a girl want...

What is your secret Valentine's Day wish? What would you love your husband to do to surprise you? What crazy Valentine stunt would you like to pull on him? If single, what would be your ultimate Valentine's Day date? And if you hate the holiday, what will you be doing instead that evening-ex-boyfriend picture burning party? Be creative!

Leave your entry in the comments section below with a valid email address to be entered to win a signed copy of What A Girl Wants and a Pandora gift card!! *Dollar amount will be determined by number of entries, so tell your friends:)

Contest will close on midnight Feb 13th. Winner will be randomly selected on Feb 14th. Best entry (the one I find the most romantic, or funny or sad) will win a copy of the book.

Thanks for entering!
xo
Jen
Posted by Jennifer Snow at 06:33 10 comments:

Once again, Linda Horn has designed a beautiful ad for my Brookhollow Series!

I love it!! Thanks again Linda!

xo
Jen
Posted by Jennifer Snow at 07:10 No comments:

Excerpt from What A Girl Wants

What A Girl Wants is book two in my Brookhollow Series and this one is about Bailey Sheppard and Ethan Bishop-the local mechanic and hockey coach/firefighter from book one-The Trouble With Mistletoe. If you loved Luke and Victoria from the first story-rest assured, they do make appearances in this next book, and I'm hoping you will enjoy Bailey and Ethan's story just as much. Here is a short, fun excerpt:)


“Okay, well, if you aren’t seeing anyone, who have you been texting all night?” Rachel asked. “I saw those smiles, and it definitely wasn’t a female friend.”


Wow, these women were observant. Bailey waved a hand. “Oh, that was just Ethan.”


“Ethan, huh?” Lindsay pulled out the chair next to her and sat, leaning her elbows on the table and resting her chin in her hands. “Tell us more about that dreamboat.”


“You two are awfully close,” Victoria said, then added quickly, “Not judging.”


No, just interested in gossip like everyone else in town. “There’s really not much to tell. We’re friends…and lately I’ve served as a shoulder to cry on,” she said wryly.


“He has to be getting over Emily by now.” Lindsay refilled her glass, emptying the bottle.


“I don’t know about that, but he’s not moping around town as much anymore.”


Silence filled the room as all three women stared at her expectantly.


Victoria finally spoke for the three of them. “We’re  just wondering when you plan on asking him out yourself.”


Bailey hesitated. It wasn’t that she hadn’t thought of it since Emily had left town, but to hear it suggested by others…


“Didn’t you just say you wanted a guy with similar interests?” Victoria asked. “Personally, I think you two would be perfect together.”


“Don’t say you haven’t thought about it,” Lindsay insisted.


These women were relentless. “Ethan’s a great guy and I like him…as a…”


“If you say brother, I’ll die,” Victoria interrupted. “I’ve met your brothers. Ethan couldn’t be more different than Brandon and Jordan. Those two are big and burly and tough.…”


“Hot in their own way,” Lindsay chimed in.


“But not Ethan hot,” Rachel interjected.


“Agreed,” Lindsay said with a nod.


These women were insane and they wouldn’t ease up until she confessed. “Fine, I’m attracted to him, but who in this room isn’t?” Bailey countered.


Victoria’s lone hand shot up, then she slowly lowered it. “He’s a firefighter, it’s the uniform. I may be getting married, but I’m not blind.” She took another sip of her coffee, then added, “Don’t tell Luke I said that. Poor guy is terrified that I’m going to back out of this wedding again and take off to New York while he’s out of town. As if I’d be that stupid again.” Her eyes took on a faraway, dreamy look.


“Anyway, I think you should make a play for him,” Rachel said with a definitive nod.


“No way.” Bailey stood. She had to get out of there, before they suggested that they call him right now and ask him out for her. A little too much wine had been consumed that evening.


“He’d never go for it.” There. The truth was out. The main reason she would never gather the courage to ask Ethan out was her fear of being rejected. The same reason she hadn’t approached him years before and had stood by while Emily had asked him to prom. It didn’t matter though. Ethan had only ever seen her  as a friend, and with or without Emily, that didn’t seem to change.
Posted by Jennifer Snow at 14:34 1 comment:

So, here it is...the cover for What A Girl Wants! 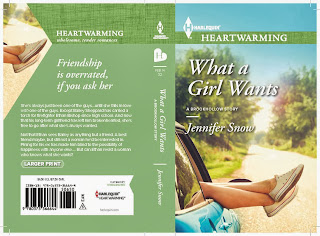 Friendship is overrated, if you ask her. She's always just been one of the guys...until she falls in love with one of the guys. Except Bailey Sheppard has carried a torch for firefighter Ethan Bishop since high school. And now that his long-term girlfriend has left him brokenhearted, she's free to go after what she's always wanted.
Not that Ethan sees Bailey as anything but a friend. A best friend maybe, but still not a woman he'd be interested in. Pining for his ex has made him blind to the possibility of happiness with anyone else...But can Ethan resist a woman who knows what she wants?

Thanks everyone for your continued support!

I'm so excited that today is the launch of the Brookhollow series with the first book The Trouble With Mistletoe.  Over November and December I will be on a blog tour-please visit me and say hi for a chance to win copies of the book and other prizes:) Stops will be posted on Facebook and Twitter.

Thank you to everyone who pre-ordered a copy and to the bloggers and reviewers hosting my launch.

Posted by Jennifer Snow at 07:54 No comments:

So, it is only 28 days until the release of The Trouble With Mistletoe...I can't wait for all of you to read it. I challenge all of you not to fall in love with Luke Dawson:) 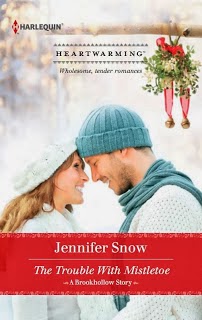 Here is another excerpt. I'd love to hear what you think. Leave a comment below for a chance to win a copy upon release.


“Oh, relax. I saw him earlier today, replacing the burnt out bulbs in Ginger’s Christmas lights and he said he was looking forward to seeing you again, so I invited him to dinner.”


“Mom, he is my ex-fiancé, in case you’ve forgotten, and we haven’t spoken in twelve years. Not to mention my company is working for the store trying to buy out Legend’s.” Victoria paced back and forth in the kitchen.


“Business is business, honey.  I’m sure you two will figure that stuff out. But can’t you just put it aside for the evening and have a pleasant dinner with an old friend? I’m sure Luke has long gotten over the fact you left him at the altar…. Even if his mother hasn’t,” she mumbled, rolling out the pie crust.


“I didn’t leave him at the altar.” Victoria stopped pacing, wondering how many times she’d had this conversation with her mom. Too many. “I called off the wedding two weeks before,” she added, “and, besides, he certainly didn’t try to stop me.”


Memories of those last few weeks before her supposed wedding day were painful to recall. The stress of the preparations—her mother and Luke’s mother forcing her to taste wedding cakes and try on dress after dress—even though her heart wasn’t in it. The entire time, hidden in her bedside table drawer had been the acceptance letter for a position with Clarke and Johnson Acquisitions. When she’d applied the summer before she’d never imagined the big firm in New York would accept her application based on her two-year business diploma. But they had and she’d had a month to decide. Keeping the offer to herself and struggling with her conflicted heart had created tension between her and Luke and had made her question her commitment to him. Their ideas about a life together had seemed worlds apart.


She’d chosen an unpaid internship with a dream of a future so different from the one he’d been planning, and left him behind. And whenever she wondered about her decision, she forced herself to remember that he hadn’t tried to stop her.


Her mother waved a hand. “You know what I mean. Anyway, it’s in the past. At least I’ve learned to keep it there…unlike some people.”


Victoria shook her head. Her mother was impossible, and Luke’s mother would be furious if she found out. The two women, once best friends, hadn’t spoken since the day Victoria left town. According to her mother, she’d let the feud between them die, but Luke’s mother still held a grudge.


Her heart skipped a beat. How was she supposed to sit at the same table with him, after everything they’d been through? She was here to do battle with him over a store. And this was supposed to be a pleasant evening? She peered through the glass opening of the kitchen door.


Luke shifted from one foot to the other on the front porch. Wearing clean jeans and his leather jacket, his short hair gelled into a spiky, controlled mess, he’d obviously gone home to shower and change.


Victoria made no move to let him in. Why couldn’t he have gotten fat? Or bald? Or both?


“Victoria, go take off your suit jacket and brush your hair, while I get the door.” Sheila removed her apron and straightened her sweater.


Victoria held out an arm to block her mother’s escape. “I have a better idea. You go get pretty for Luke, and I’ll let him in. He may as well get used to seeing me at my worst.”

Posted by Jennifer Snow at 13:24 No comments: 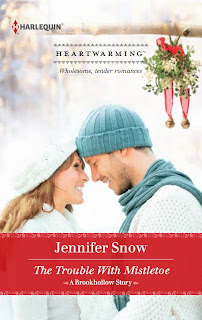 Here it is:) The cover to my November 2013 release from Harlequin Heartwarming! And below is the ad designed by Linda Horn for RWR Magazine.

We'd love to hear your thoughts! 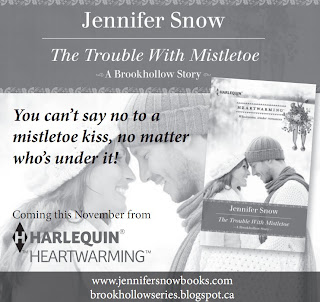 Posted by Jennifer Snow at 17:39 No comments: